Big news in the Wright household

March 04, 2014
We are excited to finally share that Lily is going to be a big sister!  After our New Year's Eve trip down south I came home and was already a few days late so I took a test while Rollie was at work and much to my surprise it was positive!  Rollie came home for lunch and I told him right away and took the 2nd test, negative...hmmm.  That evening and the following morning I took two more positive tests so I made a call to the dr. to set up an appointment.  My first appointment was on 1/13 but they didn't see anything on the ultrasound, most likely because I was only 5 weeks along.  However to rule out misscarriage and an ectopic (tubal) pregnancy I had bloodwork done over a 48 hour period, later that week my dr. said my hcg levels had doubled so I was indeed pregnant but still very early. The following week I had another ultrasound and they finally saw the sac and estimated me at 4 weeks but according to my calculations I was 6.  Two weeks later at yet another appointment we finally saw the heartbeat and they estimated I was 8 weeks along (my calculations were right!) with an estimated due date of 9/15.  We shared the news with close friends and family but have waited until now to make the big announcement.  I just returned from the dr. and heard a healthy heartbeat and I'm now a week further along than I thought at 13 weeks and an estimated due date of 9/10!

I've gone back and forth about whether or not to do a weekly update for this pregnancy but I think it's only fair to do so and I think it will be fun to compare.

Weight gain: +3 lbs definitely wearing lots of yoga pants and maternity jeans already...I figure it's my last pregnancy so might as well wear them now!

Sleep: hit or miss, I'm already getting up to pee 2x a night which is really annoying.  I'm beyond exhausted even if I do get a good nights sleep.  I've tried napping while Lily naps but that doesn't always happen.  Really hoping the 2nd trimester brings my energy back.

Overall feeling/other symptoms: excited that we can finally make it public, especially because I physically can't hid my growing bump much longer.  I've had some boughts of nasuea where I just don't feel like eating much and I'm dizzy a lot.  I asked my doc today and my bloodwork doesn't show I'm anemic (yet) but she said it's probably just low blood sugar and I need to eat more often. I'm really trying my best to workout throughout this pregnancy, it not only makes me feel better but I know it will help me (hopefully) have an easy labor and recovery too.  This pregnancy already feels 'harder' but is also going by much faster.
Here is a pic of our official announcement. 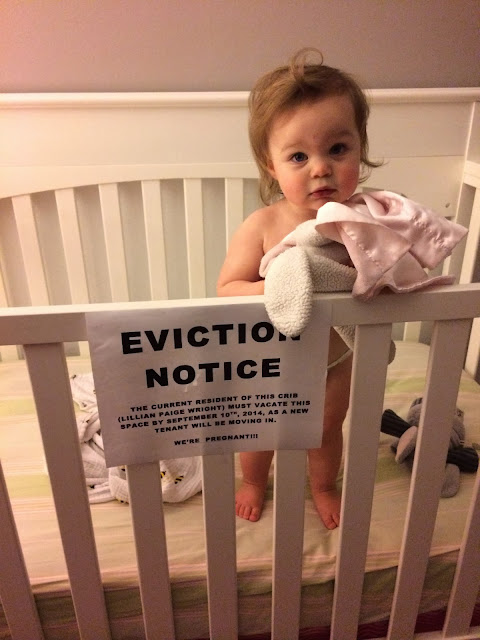 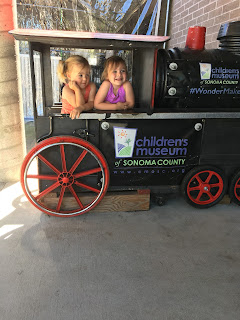 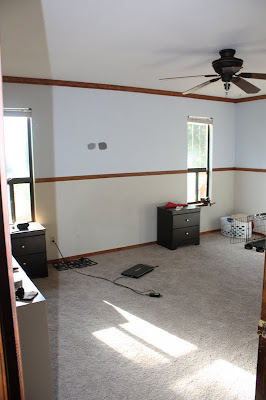